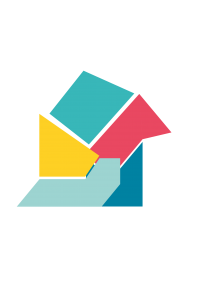 Encourage children with cancer to move in hospitals

In order to stimulate body movement for children with cancer in hospitals, I designed Blip. Moreover, Blip enables children to make use of ambiguous play in a context in which this is normally not possible.

Playing in hospitals
When a child has cancer, he or she often has to spend a lot of time in the hospital and sometimes has to be there for a longer time. When being in the hospital longer, these children are often just lying in their beds or playing a small game. This is not only causing that the children move too little, they are also not able to make use of ambiguous play.

Ambiguous play is playing with different parts (called loose parts) that can be found everywhere around you. In this play, children can give their own meaning to these parts by using their imagination. This play is for example used while playing in the woods with twigs. A twig can be used to make tree-house or be an imaginary sword, according to the child’s imagination. This kind of play is important for the development of younger children as it stimulates their imagination.

In the hospital however, ambiguous play is not really encouraged. There are often just standardized games around, which lack the ambiguous part. Therefore, I wanted to design something that could encourage these children to use their imagination while playing. Moreover, I wanted this design to stimulate children to move their bodies while playing. 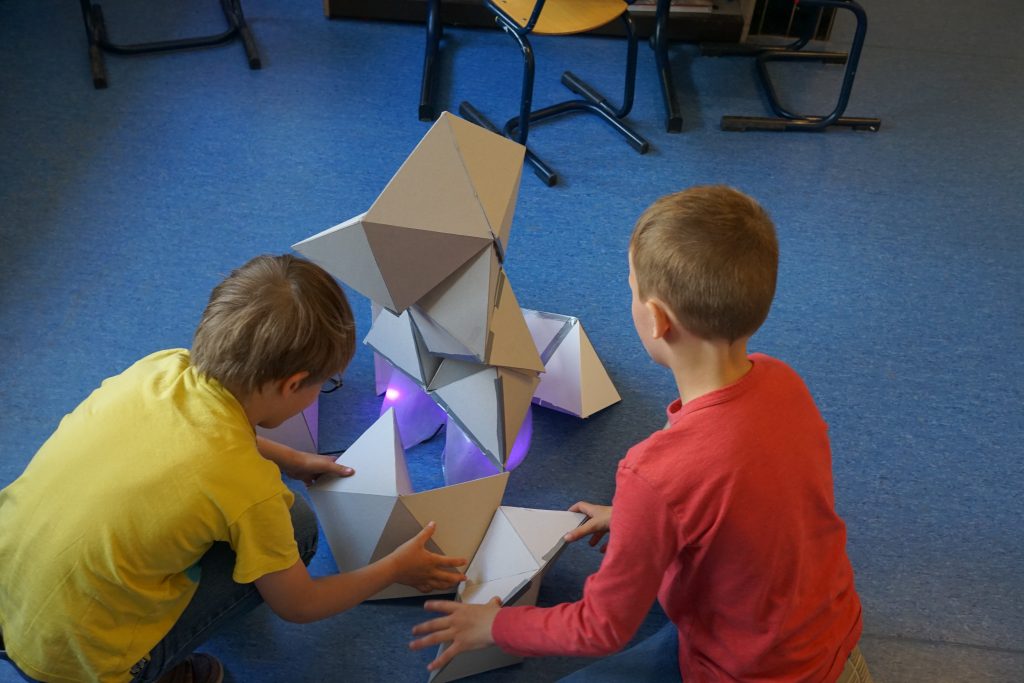 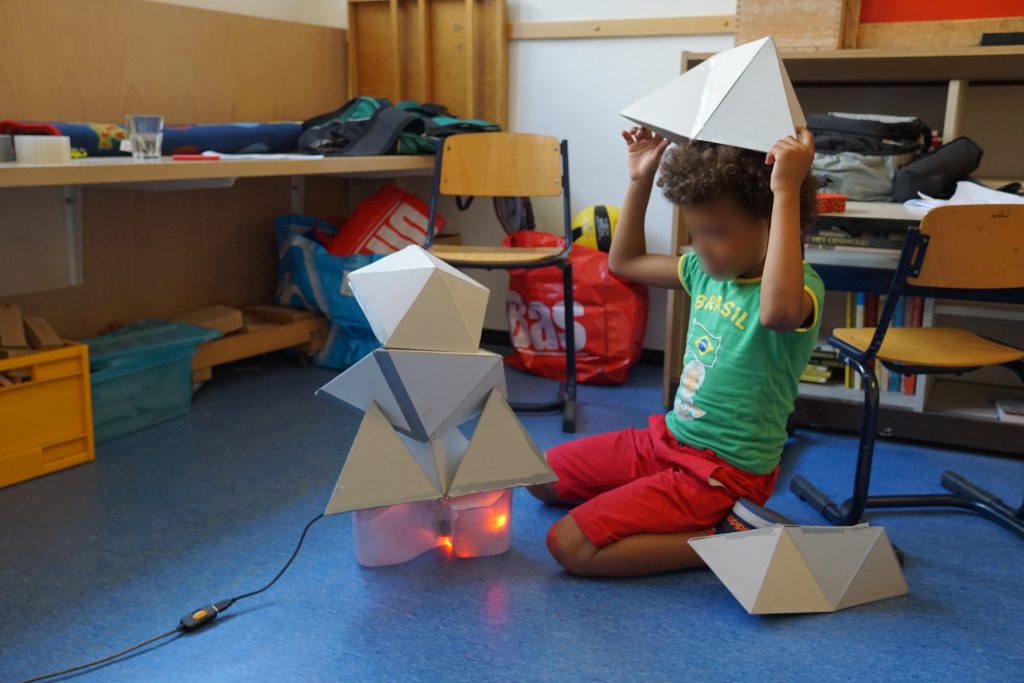 Children using ambiguous play while playing with our prototype 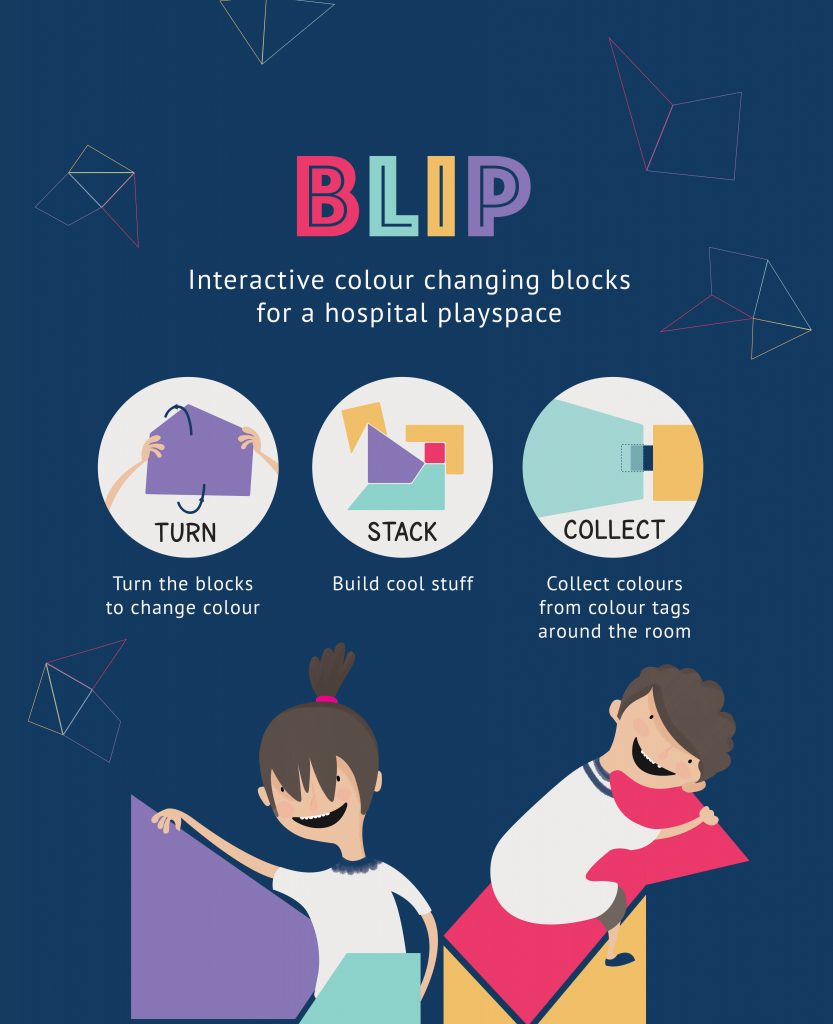 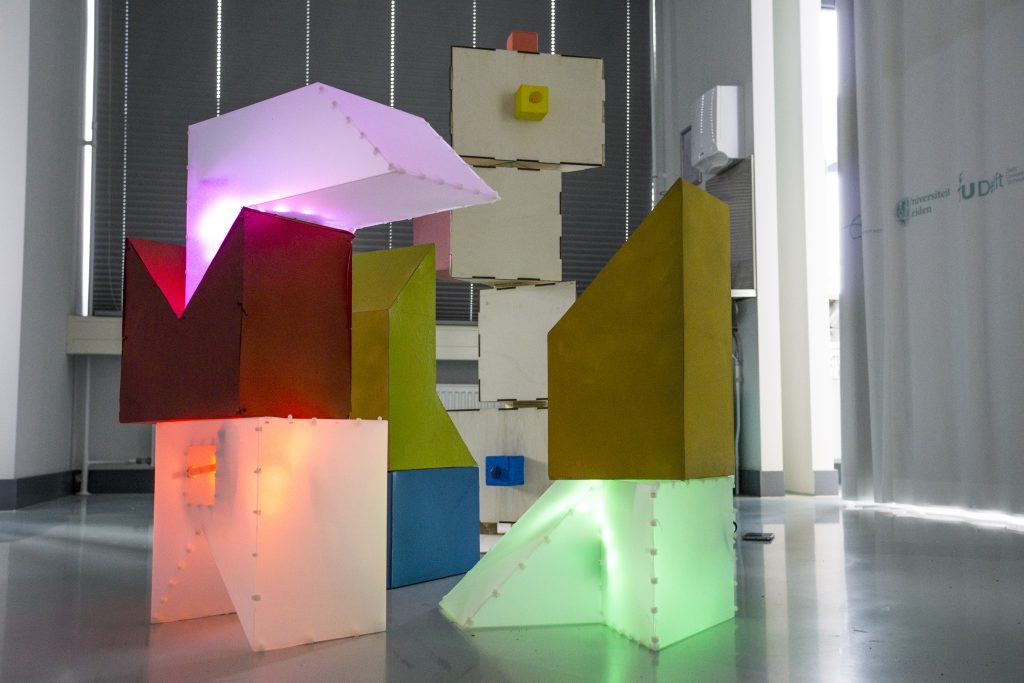 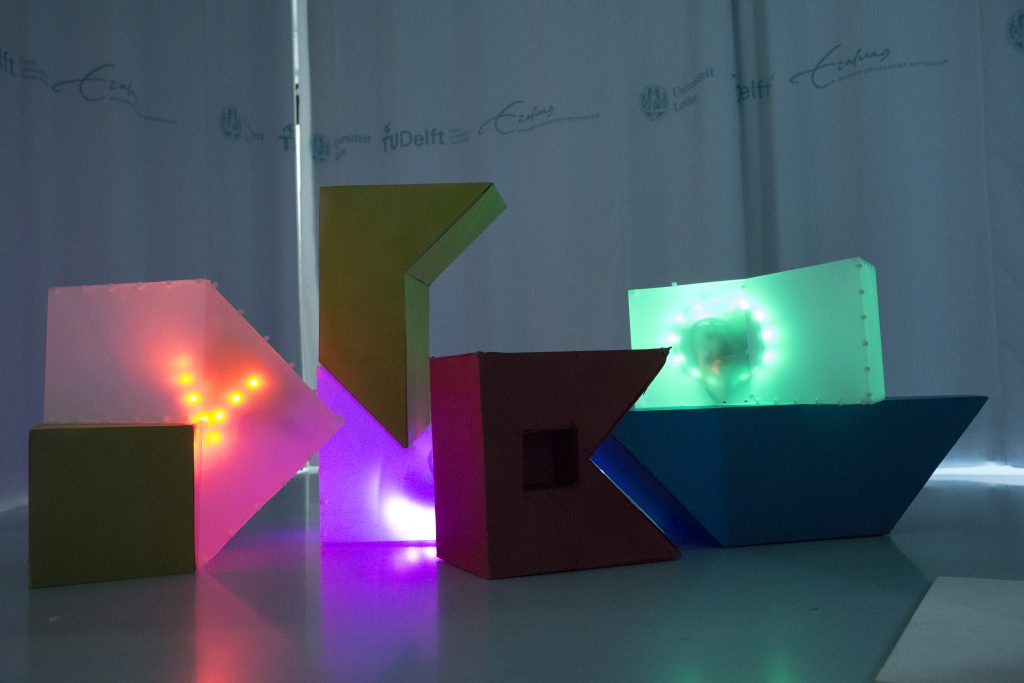 The design
Therefore, Blip is designed. This is a collection of blocks that change colour depending on their orientation. The different shapes are ambiguous. These two aspects encourage children to be curious, explorative and use their imagination while playing with them.

With Blip, children are encouraged to build, enact, move and play within the reach of their imagination. This gives them a distraction from their situation, makes them move more and enables ambiguous play.

Prototyping and testing
For this design, a fully working prototype is made, combining different techniques. The tower and the blocks were made of respectively laser cutted wood and plastic. The colours are made using LEDs and the colour collection option by using a RFID tag, this all in combination with an ardruino. 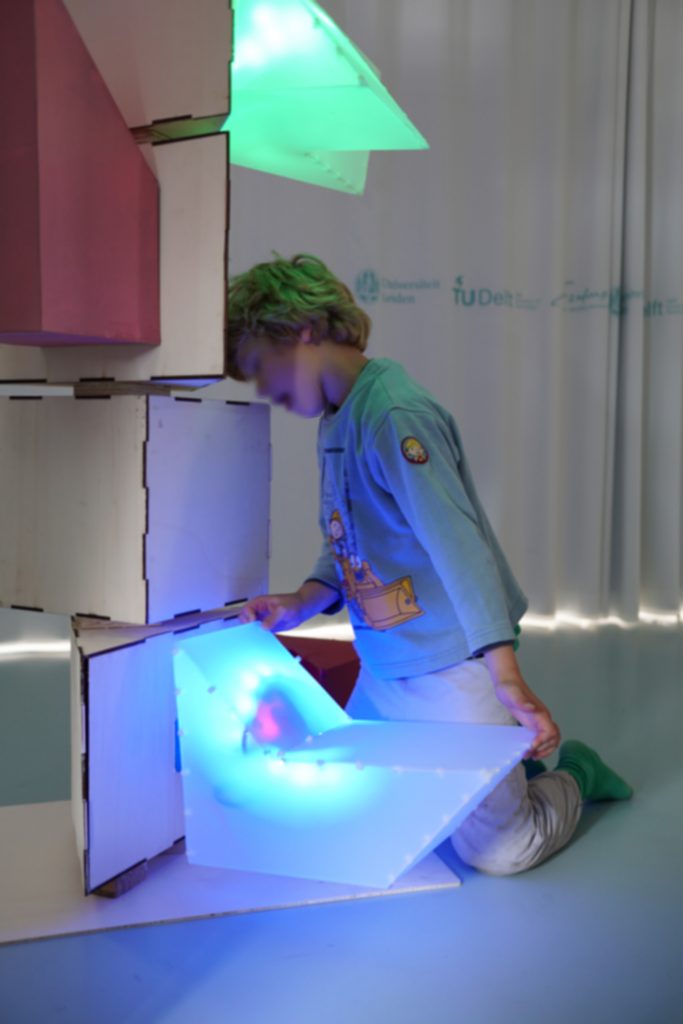 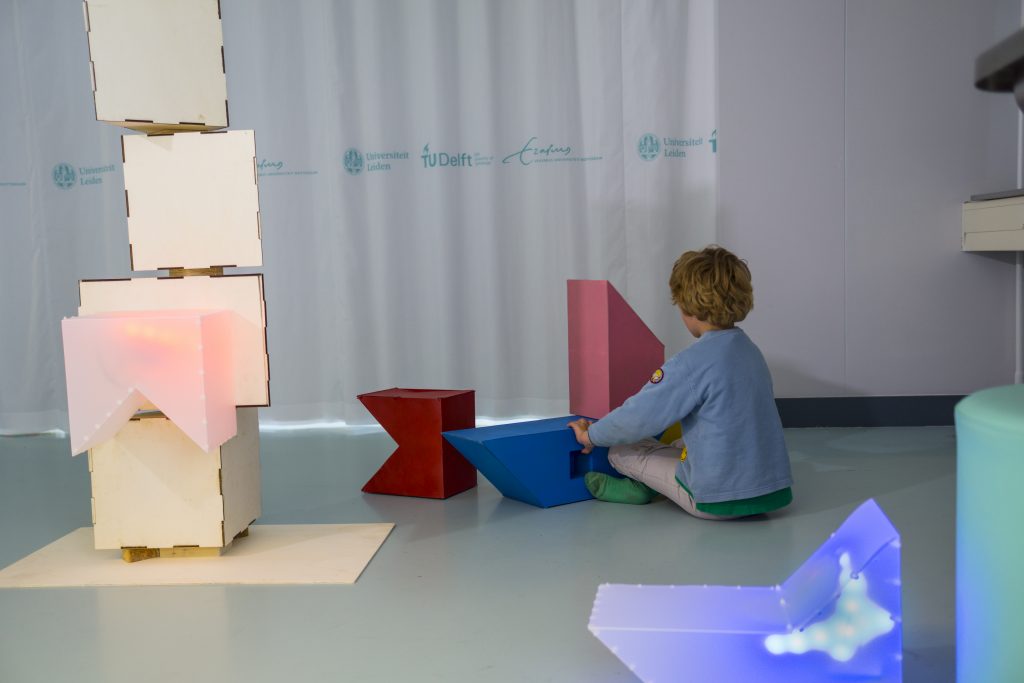 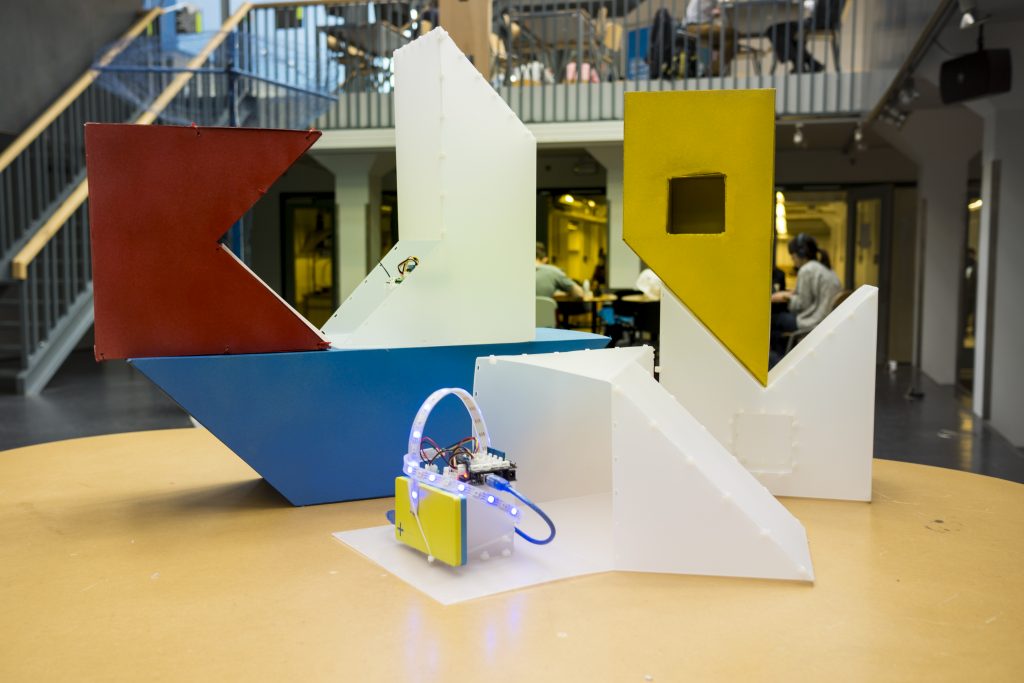